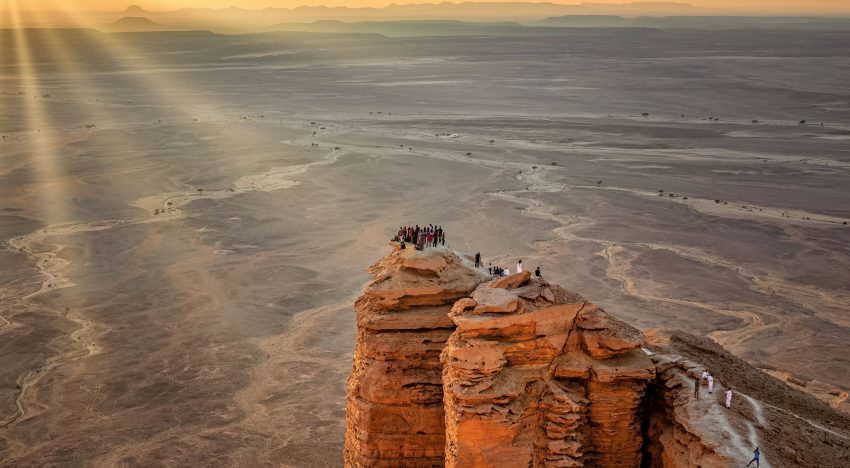 Saudi Arabia is one of the most well-known travel destinations in the world, drawing millions of tourists from around the globe each year. It offers everything a traveler could need for a wonderful, enjoyable vacation. There is no doubt that travelers consider Saudi Arabia a pleasant, stimulating journey packed with novel experiences thanks to its cultural heritage and picturesque nature, religious cults, and archaeological reaches, as well as its fun and entertaining activities and vibrant events and festivals. Here are 10 places in Saudi Arabia for nature lovers that are worth visiting.

Mount Uhud, which symbolizes the historical conflict between Muslim forces and Meccan forces in 625 CE, is one of the main tourist sites in Medina. These enormous and enormous peaks and valleys served as the locations of the Battle of Uhud, making them the most important holy site in Uhud. Numerous followers come from around the world to pray and learn about the unbelievable historical facts attracted by this special mountain range. This mountain is a well-known destination for rock climbing and trekking, and it guarantees an exhilarating journey to the top.

Jabal Al-Nour is a well-known pilgrimage destination due to its significance in Islamic history and the panoramic views of Makkah and the Holy Mosque that can be seen from its summit. Jabal Al-Nour Mountain sometimes called the “Hill of Illumination” or “Mountain of Light,” is well-known for housing the Cave of Hira. The first of Prophet Muhammad’s many revelations is reported to have been bestowed upon him here. This night is referred to in the Quran as “the Night of Power.”

One of the biggest parks in the city, it was once a horse racetrack where many horse races were held. Additionally, it hosts open events like the Saudi National Day celebration, which has fireworks before midnight. The park has a huge dancing water feature and a man-made lake, and it frequently fills with people during Eid celebrations. Moreover, there is a large pedestrian corridor, and numerous walkways surround the fountain.

The remarkable and distinctive caves on Al Qarah Mountain were created by the abrasion-induced collapse of the higher rock layers, the breakdown of water-soluble materials, and earthquake fissures.

The Al Nashab cave on the Al Qarah Mountain, which generally maintains consistent temperatures all year long, is one of the more well-known caves there. Additionally, certain caves serve as workspaces for the region’s traditional potters. There are 28 towering, straight passageways spanning 1.5 kilometers in the caves.

The Riyadh Zoo was founded in 1987 and is now among the city’s most popular tourist destinations in the city. One of the biggest zoos in the country, it has a 55-acre expanse.

It is also referred to as the Malaz Zoo. It is home to 20,000 different trees and flowers in addition to more than 196 different types of exotic animals. The houbara bustard bird, the Arabian Desert leopard, and the Arabian oryx are just a few of the Saudi Arabian wildlife species that can be found. A full zoo tour is provided by the neighborhood train ride, which is another option.

Found in the golden desert sands is – The elephant rock, also known as Jabal AlFil, one of alula’s many geological natural wonders.

The “trunk” and “body” of this monolithic red sandstone beast were formed by natural forces — millions of years of wind and water erosion — as opposed to the elaborate, hand-carved facades of the neighboring Hegra’s Nabataean tombs.

The landscape of golden beaches and rocky outcrops, many of which are equally astonishing in size and have intriguing shapes and figures, adds to the attractiveness of the raw structure.

With an estimated length of over 700 km, Saudi Arabia’s eastern coast has the largest stretch of coastline in the Gulf of Aden and the Half Moon Beach is one of the country’s most well-known tourist destinations.

The beach has a wonderful setting where the terrain that faces the water becomes an arc form, creating a surreal scene at sunset.

Sandsurfers and 4×4 adventurers can be found practicing their sports where the beaches and dunes meet.

Al Bujairi Heritage Park is full of tourist delights, including several rides for kids, food stands, a market, yard gatherings, and various workshops that teach a variety of crafts, including ceramics and calligraphy. Tour carts that offer to take you on a tour of the entire park may also be seen driving throughout the area. The At-Turaif district, a UNESCO site, is also visible from the park, especially at night when the district is bathed in gorgeous illumination.

Wadi Hanifa, formerly a place to dump rubbish, is now a stunning valley that stretches over 120 km from the capital’s northwest to its southeast.

It’s a popular weekend getaway venue for many families, frequently a peaceful location for a laid-back picnic or just a place to take in one of nature’s many breathtaking vistas.

Wadi Hanifa, formerly known as Wadi Al-Irdh before the advent of Islam, was given this name in honor of the local Bani Hanifa tribe.

Salam Park in Riyadh’s central area is an extremely popular urban attraction that hosts numerous tourists all year long. The park, which is 25 hectares in size and offers a variety of tourist activities, is well known for its favorable location. It is home to a beautiful fountain and a lake that offers fun boat rides. The park is separated into various zones, each offering a variety of attractions for visitors, including stunning green spaces, dense groves, large sports fields, engaging play areas, lengthy paths, lovely picnic places, and running trails.